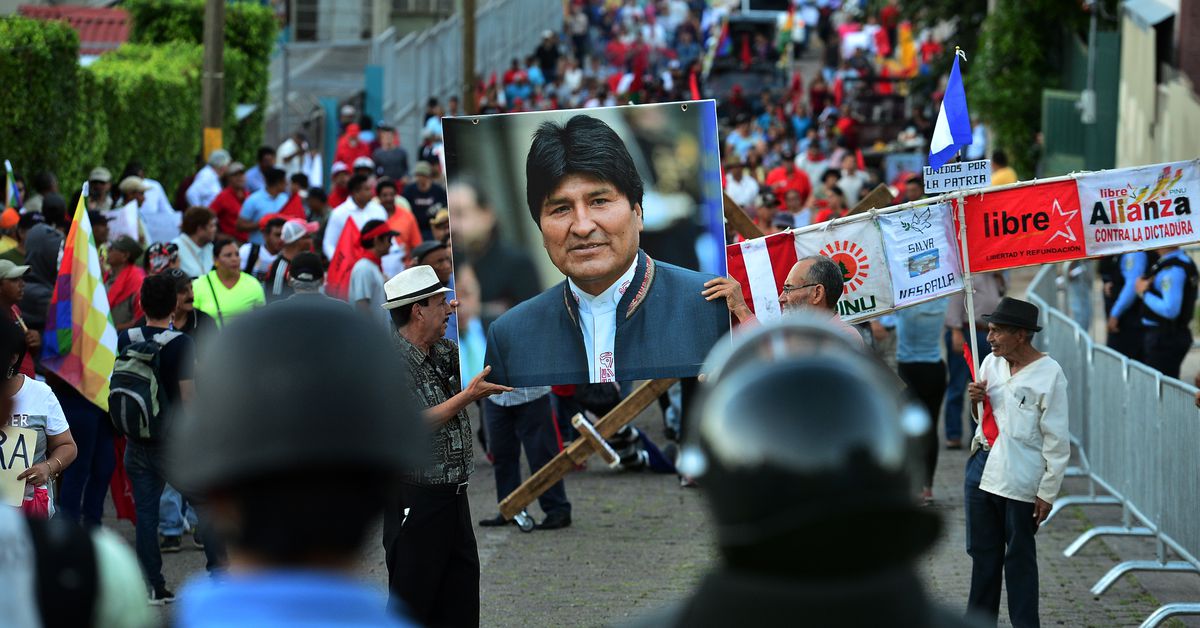 The interior minister of Bolivia’s interim government has called for Evo Morales, Bolivia’s former leftist president who has lived in exile in Mexico for nearly two weeks, to be imprisoned for the rest of his life.

Citing unverified audio recordings of Morales allegedly directing supporters to economically “strangle” Bolivian cities with roadblocks, Interior Minister Arturo Murillo accused the former president of “terrorism and sedition,” and said “any terrorist should spend the rest of their life in prison” in an interview with the Guardian published Sunday.

Experts on Bolivian politics describe Murillo’s claim as a worrying publicity stunt that illustrates how the right-wing interim government is taking increasingly extreme measures to crack down on Morales and his party, MAS, in the wake of his controversy-shrouded resignation two weeks ago.

“What those charges are designed to do is keep Morales out of the country and cast his potential candidacy — in these elections or any future elections should he decide to come back — into doubt in the minds of a lot of Bolivian voters,” Calla Hummel, a political scientist at the University of Miami, told me.

Analysts say that Morales could try to return to power, despite the fact that his own party has demonstrated interest in carrying on without him.

On Sunday, Bolivian interim president Jeanine Áñez signed a law that annulled the results of Morales’s election and prevents him from running in the next one, which should be held within the next four months. The law received unanimous support in Congress — meaning that MAS backed the idea of moving ahead to the next election without Morales as a candidate. Yet experts say Morales still commands huge support in Bolivia, particularly among poor, rural Bolivians, and it is within the realm of possibility that he could try to stage a comeback.

The events that led to Morales’s resignation two weeks ago — exactly three weeks after he ran for his fourth term for office — are complex. While some Morales critics argue that he was deposed by weeks of popular protests and strikes which were sparked by concerns about election fraud, other analysts say that the intervention of the armed forces (which “suggested” he step down hours before his resignation) in those protests means Morales was ultimately overthrown by the military.

But while Bolivians and political experts who focus on Bolivia have been debating whether or not to describe Morales’ resignation as a coup, there is a general consensus among analysts that the interim government that has taken over has been making authoritarian power grabs designed to maximize the power of the far right in Bolivian politics.

“The new government clearly benefits from keeping Morales out of the country because they know how important he is to bring cohesion to the dispersed forces that support the MAS both in urban and rural Bolivia,” Derpic said. “The easiest way to do this is to accuse him of sedition and terrorism.”

The interim government is cracking down aggressively in Bolivia

Since Morales has stepped down, Bolivia has not seen a return to calm, but rather a new period of unrest, in which MAS supporters have mobilized in huge numbers in support of their exiled president. The interim government has responded to this with the most aggressive security actions the country has seen in many years.

Two days after Morales resigned, Jeanine Áñez swore herself into power as interim president without the requisite presence of the legislative branch, which is still controlled by MAS. And instead of acting in a nonpartisan manner — her only political mandate is to hold new elections swiftly after Morales’s resignation — she has pursued an aggressive right-wing agenda.

During her swearing in, she said, “The Bible has returned to the government palace.” The move was a pointed attack on Morales, since the constitution he passed in 2009 placed Christianity on equal footing with indigenous spiritual traditions.

Áñez quickly set up a transition cabinet with almost no indigenous people, but full of business elites who oppose Morales. This was striking because Morales was the first indigenous president of Bolivia, and the country’s majority-indigenous population was considered his core base.

Áñez also issued a decree in her first few days in office that protected security forces from prosecution for cracking down on protesters lethally. Of the dozens of people who have died since protests began, a majority have died after Áñez took power and gave the military license to do things like open fire on pro-Morales protesters.

There are signs that things could potentially be taking a turn toward stability. The unanimous passage of a bill annulling October’s election and barring presidents who have served two consecutive terms (as Morales did) from running for the country’s highest office again is one such sign.

Another is that as of Sunday, Áñez has agreed to pull the military away from protest areas and roll back the decree that has given them broad discretion to use force.

But comments like Murillo’s statements to the Guardian indicate that attacks against Morales and MAS are very much still in play. And the label of terrorism and calls for imprisonment — including a specific sentence — without legal process has many analysts concerned.

“The terrorist label has been used to discredit left and especially the ‘narco terrorist’ cocaleros [coca leaf growers] for years,” Gabriel Hetland, a political sociologist at the University of Albany, told me.

That it is now being applied to setting up roadblocks in protest has Hetland — and many other experts — concerned about the direction of Bolivia’s political climate.

Rudy Giuliani butt dialed a reporter and left an accidental voicemail. It wasn’t the first time. – The Washington Post