From being 2-0 down with stoppage time round the corner in a third-tier promotion play-off to a centurion, record-breaking title procession less than 20 years later, it’s safe to say that these ‘noisy neighbours’ have seen it all.

And while Paul Dickov’s 95th-minute equaliser on that pivotal May afternoon will go down in history, here we take a look at their best seasons from their time in the Premier League, with another certain late goal unsurprisingly getting a mention. Had this second-place finish come at any time other than immediately following their first league title in more than 40 years, it would rank much higher among their Premier League campaigns. City didn’t have to wait much longer for their next second-place finish as, after another title win (don’t worry, we’ll get to those) the Sky Blues again claimed a spot in the top two. Manuel Pellegrini’s side kept pace with the eventual champions Chelsea for much of the campaign as City again posted an incredibly high points total without winning the title (this time 79).

Yet, the team did claim one title, or more specifically ​Sergio Agüero did, as he captured his first (and, amazingly, to date his only) Premier League golden boot with 26 strikes that season, including four in one game at home to Tottenham. 2009/10 was the first time ​Manchester City managed to finish higher than eighth in the Premier League era as their new signings, brought in thanks to Sheikh Mansour’s millions, made a substantial impression.

Fresh arrivals Carlos Tevez and Emmanuel Adebayor contributed to 47 Premier League goals between them in their debut campaigns in sky blue that season as Manchester City rocketed up the table to Europa League qualification, improving drastically upon a 10th-placed finish the previous year. 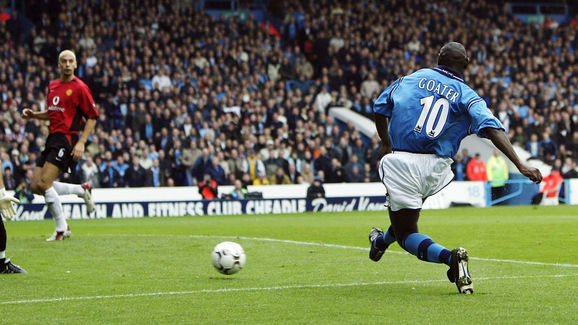 The final season at Maine Road

However, as much as any season can be defined by one match, 2002/03 will live long in the memory of City fans due to 90 minutes played out on 9 November 2002. This day saw them win their first Manchester derby in over 13 years and sealed Shaun Goater’s status as a club legend.

The Bermudan-born striker scored twice in City’s 3-1 victory over their arch-rivals, the team who had spotted a 17-year-old Goater almost 15 years previously before releasing him without a first team appearance to his name, making the victory even sweeter. Roberto Mancini’s second season at the helm would prove to be almost a dress-rehearsal for what was to come the following year as the club improved upon their previous position and points haul for the third consecutive campaign, while ending the 35-year trophy drought with victory in the FA Cup.

The summer’s arrivals, including the likes of ​David Silva and Yaya Touré, inspired the Sky Blues to their b Pep Guardiola’s debut campaign in English football was awaited with much bated breath but after his first trophy-less season as a manager, the Spaniard was met with sharpened knives rather than universal praise.

However, while a third-place finish in nothing to be sniffed at, Guardiola introduced a clear footballing identity on the club, which would prove to be the bedrock of his future success. There are, perhaps, few greater sights in recent ​Premier League history than watching Yaya Touré surge through the centre of the pitch with the ball at his feet, swatting aside any opponent foolish enough to even think about trying to stop him, before cooly slotting the ball home.

The 2013/14 campaign was unquestionably the best season in Touré’s illustrious career with such surges commonplace as City took full advantage of Steven Gerrard’s slip to clinch the league title.

On route to the trophy, Touré became only the second central midfielder to score 20 goals in Premier League history. Four of these goals also came from free-kicks – a figure no player has been able to match from dead balls in a single season since.

By this point, in his third season in charge, Guardiola’s ideals had fully permeated throughout the squad as his side claimed their second successive title with a staggering 98 points.

Taken in isolation, this is a startling achievement. But, placed in the context that City amassed such a haul following an 100-point tally (see below), with a Liverpool side who themselves accrued 97 points breathing down their neck (and often top of the table) for the entire of the campaign, and crucially, without Kevin De Bruyne for the majority of the season, this title win looks even more impressive.

Manchester City broke nearly as many records as points won during a truly incredible season in not only club history, not only Premier League history, but English football history.

Guardiola’s side treated the league like a teenager who’s just found a glitch in a video game, mercilessly mashing those sequence of buttons as the ticker in the top left keeps climbing.

For Manchester City, that unstoppable move was the cut-back. As tallied up by ​The Athletic, City scored 31 such goals in 2017/18 alone – more than Huddersfield Town and Swansea City managed in total that season. 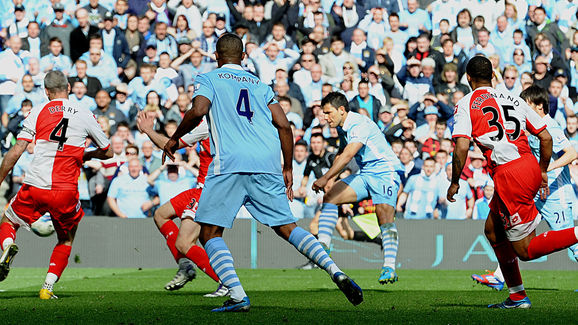 While this campaign will be remembered for Agüero’s last-gasp winner to secure City’s first title since 1968 at the expense of Alex Ferguson’s Manchester United, perhaps an even greater sense of elation came more than six months earlier.

On 23 October 2011, the Sky Blues made the short trip to Old Trafford and inflicted a humiliating defeat upon their city-rivals, putting six past Manchester United in their worst home defeat since 1955.

The importance of this historic victory to the fanbase was perfectly summed up by a supporter’s commentary, cackling into the microphone as the goals flew past David de Gea screaming:

30 Most Overpowered Players in FIFA 20