You can get a rough idea of how a top team will perform based on the mood of their manager. For a few weeks, Tottenham have played like the brooding goth that Jose Mourinho has cast himself as. And yet there was an excitement at the start of their FA Cup loss against Norwich that crept in out of nowhere, the reversal of the doom and gloom most fans think this season has become.

We need to run it back a bit. In Spurs’ 3-2 win at Aston Villa – the last match before Son Heung-min was ruled out for the season – it’s like Mourinho flicked a switch and realised if Spurs can’t defend well, they should at least attack well. Son had to score a stoppage time winner to steal the points, but the quality and quantity of chances at both ends made a match featuring a Mourinho side watchable, his front four finding a tune for the first time without Harry Kane.

Since the South Korean’s surgery on a fractured arm, however, the chances at the right end of the pitch have dried up. Mourinho’s return to the 4-2-3-1 that worked so well at Villa Park allowed Spurs to play a more open game, one with impetus and direction, even if it meant they were susceptible a little more defensively.

When Jan Vertonghen headed Spurs ahead after 13 minutes, the excitement anticipation turned to relief, palpable and touchable.

The Belgian has been criticised this season for looking past his best, often a yard slower on the pitch and in his head. Once his effort had crossed the line, he wheeled away with a playful, childish excitement – there was life in this old dog him after all.

Most of the 58,000 fans inside Tottenham Hotspur Stadium were singing his name again, and for the first time in a while, it wasn’t out of sympathy. ‘Stand up if you love Tottenham’ followed soon after. That one goal united Spurs again, but that feeling wouldn’t last the night. 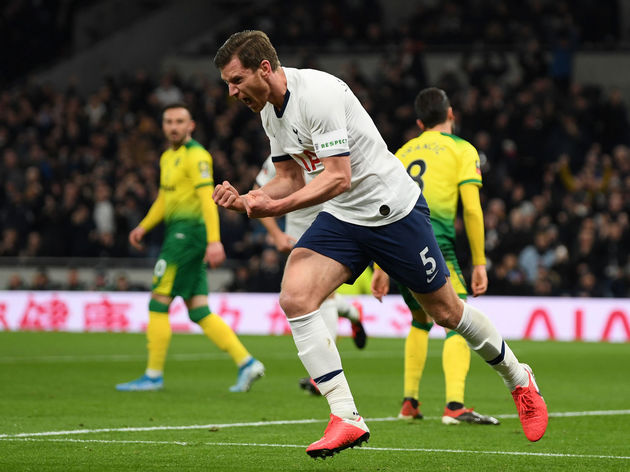 Giovani Lo Celso and Lucas Moura both had great chances to double the lead, but former enemy of White Hart Lane Tim Krul was equal to their efforts. Norwich came out of their shell in search of a goal, but were denied any clear openings by the surprisingly resolute defence of Vertonghen, Serge Aurier, Eric Dier and Davinson Sanchez.

Daniel Farke’s side’s need for a goal meant they saw more of the ball, Spurs retreating and treating the game with a bit more caution instead of searching for a killer second. Mourinho’s typical pragmatism set in, the brooding goth was in his element.

But for all of the negativity in the world, he couldn’t legislate for Michel Vorm’s error, dropping the ball at the feet of Josip Drmic to tap in the equaliser.

So Spurs had to come out again. Nothing materialised in normal time, and so for the second time this season, Mourinho had been held by the worst team in the ​Premier League over 90 minutes.

To extra-time we went.

Instant fan favourite – if only because Mourinho challenged them on it – Troy Parrott was brought on for ​Dele Alli, but he had little effect on proceedings, both sides scrambling for the ball until the clock reached 120 minutes. The lottery of the penalty shootout fell in ​Norwich‘s favour, and over the balance of the 120, that felt fair. Spurs put all their eggs in the fast-start basket and were blunted when they realised the error of their ways. For all of the promise they brought in the first half, they crumbled when they had to come out and attack again.

​Tottenham aren’t going to become a perfect football team this season, but they need to show they can still be a useful one, a team that isn’t tanking but still rebuilding – rumours of Kane’s unrest shows they can’t afford to just throw a season away. They showed little sign of being one on Wednesday.

Rio Ferdinand Gives ‘Scary’ Prediction for Future of Liverpool Side