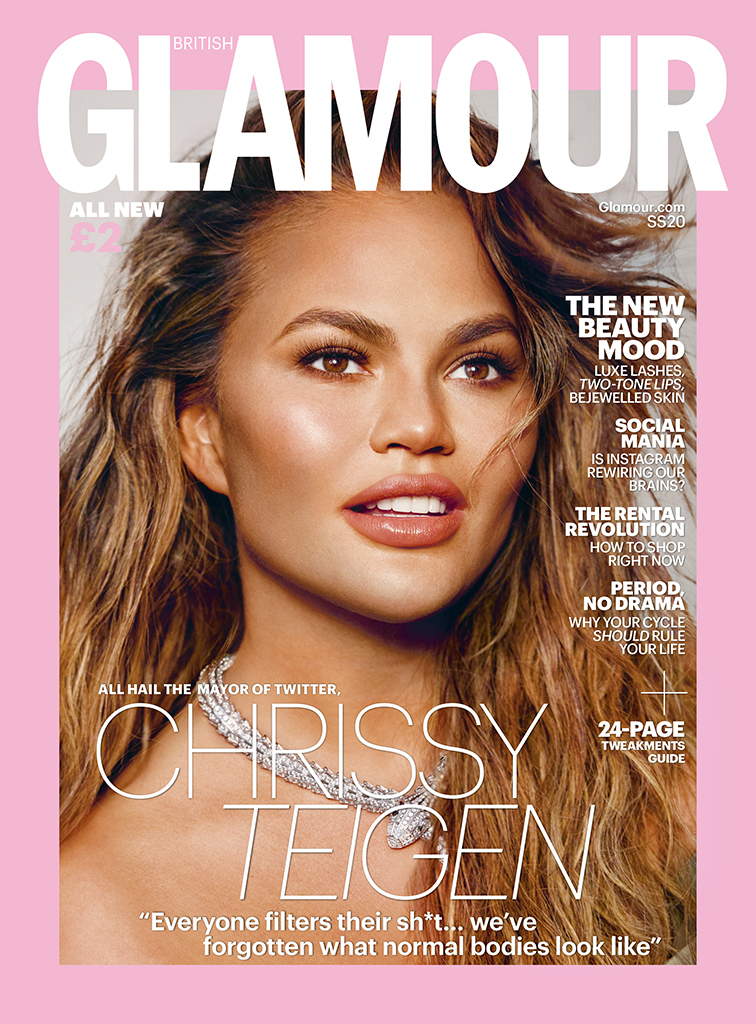 There’s a long laundry list of things a 20-something-year-old might regret and for Chrissy Teigenat that age—it’s getting her breasts done.

For the first time, the mother-of-two candidly revealed to GLAMOUR UK that she has indeed gotten a boob job.

“Yeah, I did my boobs when I was about 20 years old,” the 34-year-old shared for the Spring/Summer 2020 cover issue. “It was more of a swimsuit thing. I thought, if I’m going to be posing, laid on my back, I want them to be perky! But then you have babies and they fill up with milk and deflate and now I am screwed.”

Of course, the queen of clap backs and our favorite celebrity to follow on social media had to address the bombshell she just dropped. When announcing that she’d be on the cover of GLAMOUR UK on Instagram, Teigen joked, “Itsa me! Happy “now you know I got my boobs done when I was 20″ day!!!! Talk about a weight lifted off my chest!!!”

When asked if she had a boob job to help with her self-esteem, Teigen told the publication “Honestly, I kept them the same cup size. I just filled them out, so they are rounded and firmer. I had a quarter ‘teardrop’ cup in the bottom and filled out the breast line. But I want them out now. If I could do one thing, it would be to have a lift.”

Teigen also explained that you’re “supposed to replace [implants] every ten years” but after becoming a mother, undergoing surgery has proved risky.

“But when you have kids you think about [the risks] of surgery and I think, ‘This is not the way I want to die, in boob surgery.'”

Boob surgery aside, the TV personality spoke about struggling to feel confident in her own skin.

Before she became a mother, Teigen said, “I used to weigh myself every morning, afternoon and night. I knew what the scales would say after each meal. I did that for eight years and had this one weight I wanted to be at.” But that changed when she had Luna and even more so when she had her youngest, Miles. She then became “comfortable with my new normal number.”

The Cravings author also spoke to GLAMOUR UK about her mental health and dealing with postpartum depression, which she has been consistently outspoken about her fans and followers on social media.

“The last month has been really tough. I’ll tell John, ‘Deep down, I know I am happy.’ But I think anyone with anxiety knows it’s physically painful to think about doing things. Sometimes reaching for your medication is like picking up a 60kg dumbbell that I don’t feel like picking up and I don’t know why.”

However, she’s keeping a positive outlook and “building myself back up.”

Is Reza Farahan’s Husband Adam Getting Naked With Other Men?