​Tottenham Hotspur manager José Mourinho has condemned midfielder Eric Dier’s clash with fans following the loss to Norwich City on Wednesday, but admitted that he understands why the Englishman did what he did.

Following the game, which saw Spurs crash out of the FA Cup on penalties, Dier was seen climbing over seats ​to confront a fan in the stands, before being restrained and then removed by security.

Initial rumours have suggested that something was said about ​Dier‘s younger brother, and Mourinho appeared to confirm that in his press conference after the game.

“I think Eric Dier did something that we professionals cannot do but in these circumstances every one of us would do,” the boss said.

“Because when somebody insults you and your family is there and you get involved with the person that is insulting you, in this case a younger brother, I think Eric did what we professionals, we cannot do.

“This person insulted Eric, this family was there. The young brother was not happy with the situation and then Eric, I repeat did what we professionals cannot do, but did something that probably we would do.”

Suspect everybody secretly admires what Eric Dier did. Don’t abuse people from behind a fence. Might come back to bite you.

Unsurprisingly, the ​Spurs press officer quickly tried to get everyone to move on. It’s almost as if there was actually a game of football on Wednesday. Who knew?

The match saw Spurs give up a 1-0 lead following a mistake from goalkeeper Michel Vorm, and Mourinho’s men eventually crashed out on penalties. It was hardly an inspired performance from the team, and Mourinho was quick to point to his side’s fitness struggles. Again.

He said: “[Fans] probably don’t know and if they don’t I have to say that [Steven] Bergwijn, Lucas [Moura], Dele [Alli], all of them they told me ‘I can’t carry on. I’m completely dead’. 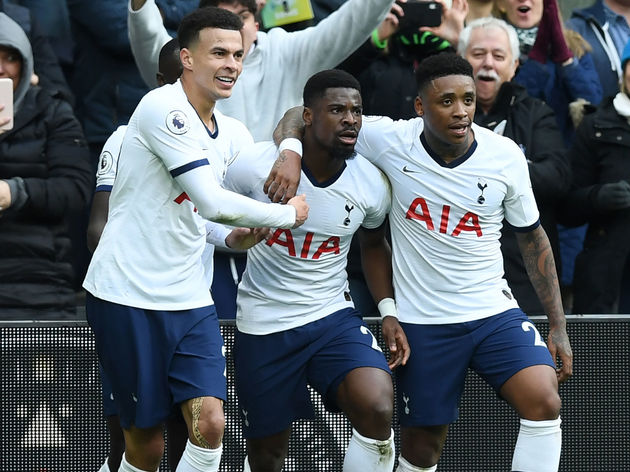 “I think the team defended very well today. We were very solid. Very compact. Even in great difficulties, I think the boys they were quite solid in relation to the qualities they have. A clean sheet was very close. The game was controlled.

“Of course I had, and sometimes people don’t understand my decisions, but they don’t know what is going on, Lucas and Bergwijn they told me ‘out immediately because I am very close to being injured’.

“So I had to take them out in a moment where the result is 1-0 and there is always a risk of happening what happened.”

Chelsea’s 10 Greatest Players of All Time