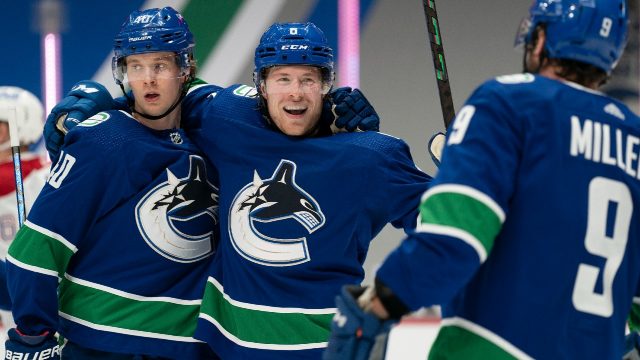 In a little more than four minutes on Sunday, Elias Pettersson scored as many goals for the Vancouver Canucks as he had the previous six weeks: two.

But four goals are twice as good as two, and the most important aspect of the Canucks’ 4-2 win against the Washington Capitals is that Vancouver’s most talented forward finally has something to show for his determination to play his way out of a bewildering season-long scoring slump.

It’s uncertain – and certainly mathematically unlikely – that the Canucks will save their season and make the playoffs. But their slim chances will improve significantly if Pettersson saves his season and starts producing like the elite offensive driver he was before he injured his wrist more than 10 months ago.

Canucks on Sportsnet NOW
Stream every Canucks game this season with new pricing options! SN NOW STANDARD and PREMIUM let you choose how much hockey you want to watch.
CHOOSE PLAN

Just as it is ludicrously over-reactive for some in the fan base to suggest the Canucks should trade their franchise player because Pettersson has had three poor months after three mostly-spectacular years, it’s also ridiculous to conclude his scoring troubles are over and Sunday was the turning point.

The Canucks are 38 games into their season and Pettersson has eight goals and 19 points.

But he badly needed a game like Sunday, and so did the Canucks, who opened their Murderer’s Row tour through the Southeast with three straight losses and now have the chance to finish their five-game torture tour at .400 if they can beat the Nashville Predators on Tuesday.

On a nine-game points streak until the Canucks postponed two home games in early January, creating a nine-day gap between games that cooled the team and cost all-star goalie Thatcher Demko his rhythm, players wouldn’t have been happy at the prospect of a 2-3-0 record when this trip began.

Now, that would feel like victory – or at least validation after they were outclassed in Florida, Tampa and Carolina.

“The confidence will definitely be brewing,” Canucks coach Bruce Boudreau said on Zoom from Washington. “We couldn’t wait to get back in front of our fans. This is nine games on the road in a row (since Dec. 14). It’s not an easy stretch, and to stay at .500 or hopefully be above .500 on that, it keeps our nose above water.

“It would be a great way to end the trip. You wouldn’t even remember the first three games.”

The biggest difference for the Canucks in Game 4 was the reappearance of a power play that started the trip 0-for-12 and, by extension, the re-emergence of their best players.

Vancouver scored on its first two power plays, Pettersson stepping around his check to shoot post-and-in 33 seconds into middle period, and J.T. Miller teeing up Bo Horvat from the high slot 18 minutes later.

Pointless during the three-game losing streak, Miller also scored into an empty net from Brock Boeser’s feed. It was Boeser’s first point of the trip. Defenceman Quinn Hughes was brilliant and collected his first two points of the trip, while Horvat scored for the second straight game.

And Demko, forced to start Saturday in Raleigh after backup Jaroslav Halak tested positive for COVID, was outstanding while playing for the second time in 24 hours.

Sadly, winger Conor Garland’s big move on Sunday was to the COVID protocol list as the Canucks continued their one-a-day string of positives.

But none of that felt as significant as Pettersson scoring for the first time since Dec. 14, ending a six-game slump-within-a-slump that had seen him generate just a single assist.

It was the first two-goal game this season for the 23-year-old former Calder Trophy winner who had 55 goals and 132 points during his first two years in the NHL.

“I know what I’m capable of,” Pettersson said. “But, of course, it’s been a very slow start for me. But it’s a good win for us today, and we’re happy with my two goals today.” 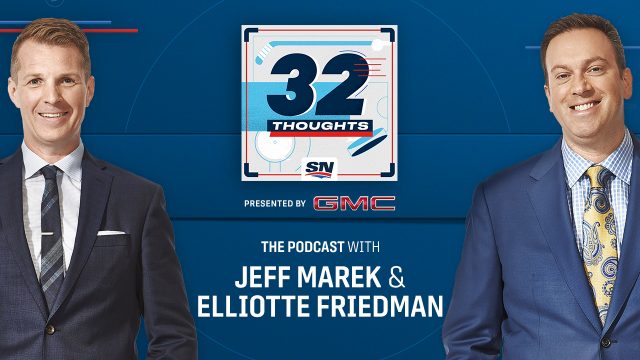 32 Thoughts: The Podcast
Jeff Marek and Elliotte Friedman talk to a lot of people around the hockey world, and then they tell listeners all about what they’ve heard and what they think about it.
| Listen and Subscribe for free
| Marek on Twitter
| Friedman on Twitter

Pettersson’s scoring problems weren’t helped by five days in COVID protocol, announced by the Canucks on Jan. 5. He hadn’t spoken to the media since December.

“Honestly, I don’t know what to say but, of course, it’s been tough for me,” he said. “I’m trying to play my best hockey every game, and it’s been a slow start. But we’ve been playing good recently. . . and we got a good win here and we’ll go from there.”

“He’s a confident player,” Boudreau said. “But it’s not easy to keep your confidence when every day the media wants to talk about you and you’re seeing it on TV, you’re hearing about it on the streets. When you’re a really good offensive player like Petey is, you think about it almost all the time. So to stay with it and to keep going at it is a tough thing. But he’s been able to block the noise out and keep working at it.”

For the third straight game – and third time in his NHL career from the start of a game – Pettersson played left wing beside Horvat instead of as a centre.

Pettersson said Sunday that he just wants to play and will go wherever Boudreau wants him, although the coach told reporters last week that the player had asked for the move to the wing.

“I think things are easier,” Boudreau said Sunday. “He sees the ice better and he’s always the first man on the puck in the other team’s zone instead of the last man as most centers are. He hit the post last game, and he had a couple of breakaways the game before, so it was inevitable that he was going to score at some point. Tonight he got two great, important goals, and I just hope it’s not a one-off and he can continue to do this and get a little streak of his own going.”

That last bit applies to the team, too.

Senators win second in a row on the road, thanks to Stützle in shootout