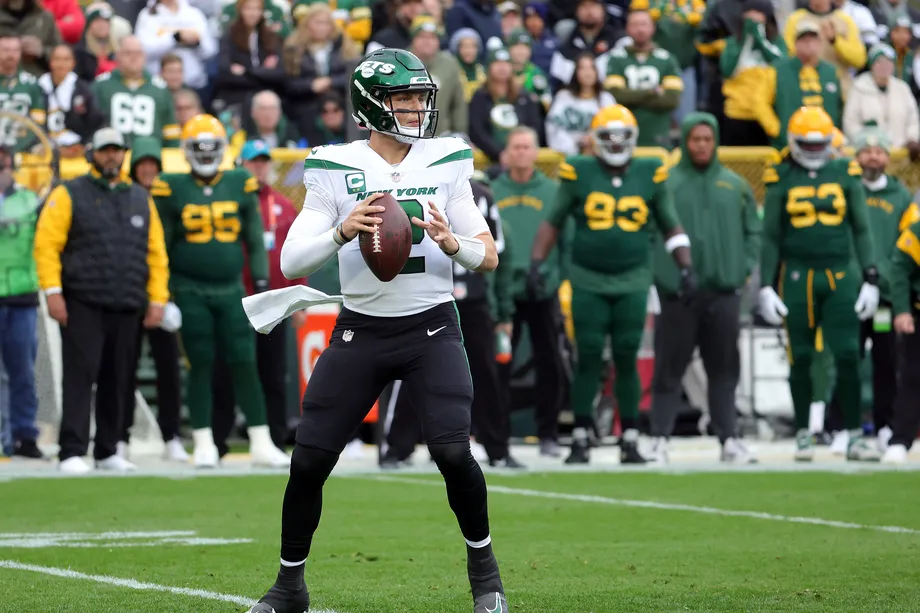 The New York Jets are one of the best stories of the 2022 season.

But take a scroll through Jets Twitter these days, and you can feel a bit of unease in the air.

Part of the reason for the apprehension is the injury to rookie running back Breece Hall, who has become an immediate focal point of the Jets’ offense. New York worked quickly to address the running back room, adding James Robinson via a trade, but Hall’s burst and explosiveness was a big part of their 5-2 start.

Then there is quarterback Zach Wilson.

Since coming back from the knee injury suffered during the preseason Wilson has been, well, let’s say inconsistent. The Jets are 4-0 in his four starts, which is a good thing! In those four starts, Wilson has completed 57.4 percent of his passes for 693 yards, one touchdown and two interceptions. His Adjusted Net Yards per Attempt (ANY/A) of 5.22 in those four games places him 25th in the league, however, just behind Davis Mills and just ahead of Mitchell Trubisky.

Perhaps most telling, however, is Wilson’s performance when pressured, versus when he is kept clean. When given the chance to operate from a clean pocket, Wilson has been one of the best quarterbacks in the NFL this season. According to charting data from Pro Football Focus, Wilson has posted an Adjusted Completion Percentage (ACP) of 85.3 percent this season, behind only Skylar Thompson(?!) and Jalen Hurts. He has completed 75.7% of his passes when throwing from a clean pocket, for 639 yards, a Yards per Attempt (Y/A) of 9.1, and one touchdown, along with no interceptions.

His numbers when pressured, however, are much different.

According to PFF’s data, when pressured this season Wilson has struggled. Mightily. He has completed just 16.1% of his passes this season, hitting on 5 of 31 pressured attempts for 54 yards, no touchdowns, and 2 interceptions. His Y/A of 1.7 when pressured is 38th in the NFL, out of 38 qualified passers.

Now, it is true that Wilson’s offensive line has given up some pressures this year, and watching the quarterback’s four starts you can see moments and plays where he does not have a chance.

But there are also moments where Wilson has an opportunity to avoid pressure, by making a quicker decision with the football. PFF also charts Allowed Pressure, examining those plays where a quarterback bears some responsibility for the pressure he then faces in the pocket. According to this charting data, of the 36 dropbacks he has been pressured on this season, Wilson shared some of the blame for the pressure on 16.7% of them.

That is 13th-most in the league.

Given what Wilson has done when pressured this year, minimizing the pressure he faces in the pocket should be a priority for the Jets’ offense going forward, and that can start with more consistent execution up front. Right now the Jets are ranked 21st in ESPN’s Team Pass Block Win Rate, so there is room for improvement.

But Wilson could be better, too, at avoiding pressure himself.

That starts with his eyes.

Consider this. Wilson right now has a Time to Throw (TTT) of 3.16 seconds, which is the slowest in the league according to Next Gen Stats. Now, part of that might be due to the pressures he’s faced in the pocket, and PFF does split out TTT between pressured and non-pressured plays. When pressured this season, Wilson has a TTT of 4.37 seconds, second-slowest in the NFL.

When kept clean he is faster, as he gets the ball out in 2.49 seconds. But that places him just 28th in the league.

One of the biggest improvements Wilson can make right now, both in terms of avoiding pressure and in terms of executing the offense, is through making faster reads and decisions with the football. Not only will that have an impact on his pressure numbers, by cutting down the amount of pressure he faces in the pocket, but it will also put his receivers in a position to succeed after the catch.

With all of this as a backdrop, let’s examine how this plays out on the field. We can start with his return to action, against the Pittsburgh Steelers in Week 4. Wilson completed 18 of 36 passes for 252 yards, a touchdown and two interceptions in New York’s comeback win, but there are examples of how he could make some quicker decisions with the football, and get better results for himself and the offense.

Take this play from late in the second quarter. Facing a 3rd and 14, the Jets dial up a three-level concept to the right, and Wilson ultimately targets rookie wide receiver Garrett Wilson on an out route:

Pittsburgh brings just four on this play, and Wilson has a clean pocket to work from initially. The route from G. Wilson takes a little time to develop, but the quarterback is looking right at it as the receiver gets into, and out of, his break.

But the ball does not come out of Wilson’s hands. The quarterback hesitates, which allows some pressure to develop off the right edge. Making matters worse, Wilson then double-clutches, allowing defensive back Arthur Maulet time to recover and drive on the route. By the time the throw gets to G. Wilson, Maulet is in position to break up the pass, and the punt team comes onto the field.

If Wilson makes this throw on-time and in-rhythm, then he puts his receiver in a better position to not only make the catch, but pick up additional yardage after the reception. Instead, Wilson turns this into a 50/50 proposition at best. If the receiver can see the football leave your hands, odds are your throw is too late.

Here is another example, from New York’s Week 5 win over the Miami Dolphins. The Jets face a 3rd and 4 in the red zone, and run a triangle concept to the right side of the field with Corey Davis running a corner route, tight end C.J. Uzomah running a spot route, and Hall releasing to the flat. Backside, Elijah Moore runs a post route.

Miami drops into Cover 2 on this play. Right after the snap, Wilson looks to the right side of the field to read out the concept. He eventually gets his eyes backside where Moore is breaking open between the safeties, but by the time he releases this throw, it is too late:

Wilson does a very good job of getting his eyes backside quickly. He sees the coverage, and a safety over Davis’ corner route, and snaps his field of vision to Moore’s post route. If he makes a throw on-time and with some anticipation, he can attack this coverage with that route from Moore. But again, he hesitates, and that invites pressure off the left edge late in the play. Wilson does a good job at stepping around the pressure but by the time he lets this pass go, Moore has run out of real estate.

Down in the red zone, everything has to happen that much faster, as you have a compressed area to deal with and an extra defender in play, thanks to the end line of the end zone. If Wilson is just a little bit faster with his decision on this play, he avoids the pressure, and the Jets likely put six points on the board.

Here is one more example, from the Jets’ win in Week 6 over the Green Bay Packers. As discussed in this piece last week, the Packers did a good job at disguising looks and confusing Wilson. But there were still moments where the quarterback could have made quicker decisions, and punished the defense for trying those rotations at the snap. This was the example highlighted in the previous piece:

The Packers show pressure before the snap, with defenders mugged up in blitz posture, but at the snap they drop off and sink into zone coverage, and Wilson ultimately throws it away under pressure.

Here is another example from that game that finds the Packers showing pressure, but dropping into Cover 2 after the snap. Wilson has a chance to make a play, but hesitates, and eventually runs out of time:

Wilson opens to the left side of the field, where the Jets have a hitch route on the outside and a fade route out of the slot. Given the pre-snap pressure look, Wilson might be expecting man coverage, and looking at the fade route makes sense. But once he sees the defense dropping into zone, he gets his eyes to the right side of the field, and looks at G. Wilson on the spot route.

His receiver is open at the sticks to perhaps convert this 3rd and 6, and if Wilson gets the ball out on-time and in-rhythm, the Jets likely move the chains. Instead, he hesitates, inviting pressure and the eventual sack.

Wilson’s numbers under pressure this year are not great, and as we have seen there are moments where he is responsible, at least in part, for the pressure he faces in the pocket.

But there is a silver lining here, and a pretty big one for Wilson, the Jets and their fans.

On each of these plays, Wilson gets his eyes where they need to be, and pretty quickly in the down. That is a huge thing for a quarterback, and for many young passers that is half of the battle right there. Getting the eyes where they need to be when the defense either shows you something unexpected, or takes away your first option. Wilson is solving that part of the equation.

The next step, however, is what is missing right now. Once he gets his eyes where they need to be, the ball needs to come out.

Making faster reads and decisions is something that all young quarterbacks have to learn, and Wilson is no exception. Let’s not forget, we are talking about a second-year passer who made the 17th start of his career last week. In a sense, Wilson is just finishing up his rookie year. He is still adjusting to life as an NFL passer, and dealing with the pressure you see in the pocket playing on Sundays.

If he solves that part of the equation, he will keep himself ahead of the defense and stop inviting pressure, or creating pressure in the pocket. He will also give his receivers chances to make plays downfield, after the catch.

And the Jets’ passing game will see the benefits on the whole.