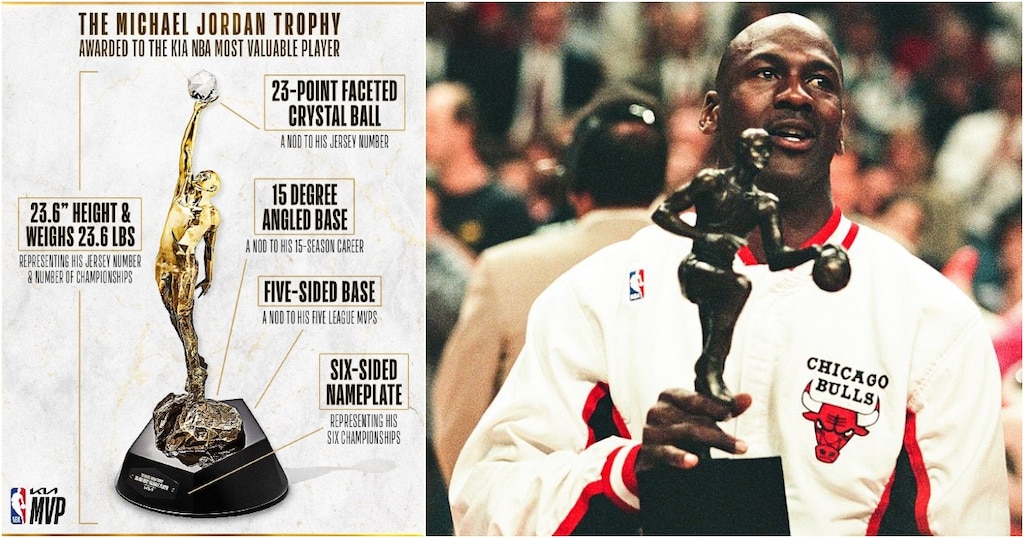 The NBA is going through a rebranding.

The league announced the renaming of five end-of-year trophies, with the MVP trophy now being called The Michael Jordan Trophy.

“Our new collection of trophies celebrates some of the greatest and most impactful players in the history of the NBA,” said NBA Commissioner Adam Silver.  “As we recognize the league’s top performers each season, we also pay tribute to the legends who embody these prestigious awards.”

The trophy will stand 23.6 inches tall and weigh 23.6 pounds, an ode to Jordan’s jersey number and NBA Finals wins.

“I’m incredibly honored to have created the NBA’s MVP trophy in partnership with Michael Jordan,” trophy designer Mark Smith said.  “Sculpting Michael’s vision of his own pursuit of athletic achievement into this award has been the opportunity and challenge of a lifetime.  As we worked together on this project, it was very important to Michael that the figure not be a likeness of him, but instead that the recipient should be able to see himself in the award.  For Michael, naming the award in his honor was recognition enough.”

Michael Jordan, of the 75th Anniversary Team, smiles during the 2022 NBA All-Star Game as part of 2022 NBA All Star Weekend on Feb. 20, 2022 at Rocket Mortgage FieldHouse in Cleveland. (Jeff Haynes/NBAE via Getty Images)

The NBA has made changes to its trophies in past years, with the NBA All-Star Game trophy being named after Kobe Bryant and the NBA Finals MVP named the Bill Russell NBA Finals MVP trophy in 2009.

The MVP trophy is just one of five trophies that has been renamed.

It is the second time Mikan has been honored in the past two months, with the Los Angeles Lakers retiring Mikan’s No. 99 jersey in October.

“We are grateful that the NBA has recognized George’s career achievements with this honor,” said Mike Mikan, son of George Mikan, #99, and the Mikan family.  “George is one of the best NBA players ever, but perhaps his greatest legacy is the one he has passed down to others through his legendary ‘Mikan Drill,’ providing generations of basketball players around the world with the tools to improve their game.”

Jerry West looks on before an NBA game between the Phoenix Suns and the Los Angeles Clippers on Oct. 23, 2022 at Crypto.com Arena in Los Angeles. (Photo by Brian Rothmuller/Icon Sportswire via Getty Images)

The league will also have a new award this season, with the NBA Clutch Player of the Year being named after Jerry West.

“There are few greater thrills as a basketball player than coming through for your teammates and fans when they need it most,” said West, special advisor for the LA Clippers.  “This new trophy will be awarded to the player who best delivers in those moments.”

Pettersson emerges from shadows in massive Canucks win over Capitals