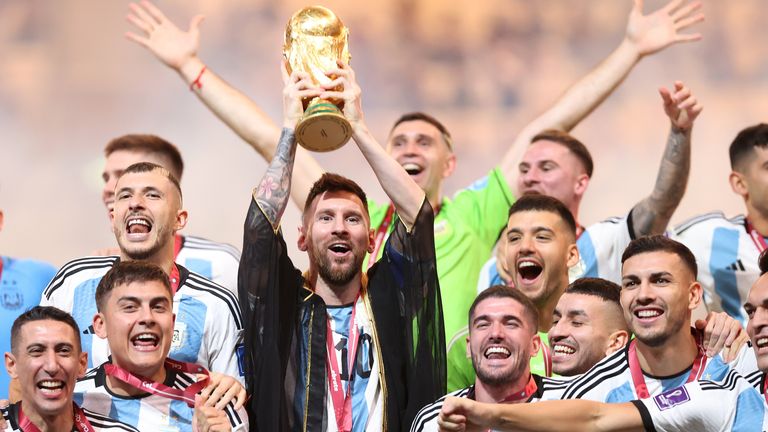 In a game that will go down in history as one of the greats, France twice came from behind to send the game to penalties. Although Messi will take the headlines, Kylian Mbappe was the first player to score a hat-trick in a World Cup final since Sir Geoff Hurst for England in 1966.

Argentina dominated for the opening 80 minutes and looked to be cruising to their first World Cup title since 1986. Messi fired his side ahead from the penalty spot in the 23rd minute after Ousmane Dembele was judged to have tripped Angel Di Maria – although it looked to be a soft decision.

Juventus winger Di Maria added Argentina’s second after a fine sweeping move – spearheaded by Brighton’s Alexis Mac Allister – as France looked to be suffering from the effects of illness in camp during the week.

But Les Bleus came roaring back into the tie when they were handed a lifeline in the 79th minute as the impressive substitute Randal Kolo Muani was tripped by Nicolas Otamendi. Mbappe scored from the spot for his first of the evening, before adding a stunning second just 90 seconds later to take the game to extra-time.

Messi thought he had won it for his side as his rebounded strike was given by goal-line technology in the 108th minute. But, with mere minutes to play, France were awarded another penalty after Gonzalo Montiel was penalised for handball.

But Kinsgley Coman and Aurelien Tchouameni both missed their spot kicks for France as Argentina scored each of their remaining three, with Montiel firing home the winning penalty to win the 2022 World Cup.

“This squad, these players, play for their people. They play for the Argentina fans,” said an emotional Lionel Scaloni after the game. “That’s what I have always seen. There are no rivalries, everyone pulls in the same direction.

“It is the greatest pride to play for your own country. The players broke their backs, have achieved this title because they understood what they had to do on the pitch. We are very very happy and proud.

“Today we are World Cup champions. Although we went to a penalty shoot-out, we deserved the win because of our great performance. Only some moments they made trouble for us.”

“He’s more than entitled to decide if he wants to keep playing for Argentina or not, and what he wants to do with his career.

How Argentina came out on top in an all-time great

France were second best for almost 80 minutes of the game, but will have questioned the awarding of Argentina’s penalty in the 21st minute. Di Maria dinked easily past Dembele and into the area, with the Frenchman barely grazing his foot before the Juventus winger went tumbling to ground. There was no VAR review of the referee’s decision to award the penalty.

There was little doubt who would take the spot kick. It was lined up and expertly dispatched by Messi – rifling the ball past Hugo Lloris – as the blue and white shirts dominating the stands were sent into raptures.

Argentina continued to dominate against a sluggish France, and it was a special goal to make it 2-0. Messi started the move, flicking the ball to Julian Alvarez on the halfway line. He then spotted the run of Brighton’s Mac Allister, who drove forward with plenty of space, before squaring to Di Maria on his left. The winger then made no mistake in slotting home.

Big moments of the game…

That was all Didier Deschamps needed to see from his side. Olivier Giroud and Dembele were both hooked in the 41st minute, replaced by Marcus Thuram and Kolo Muani, and were out far earlier than Argentina for the second half.

Argentina continued to see the better of the chances after the break, with Alvarez and Mac Allister linking up nicely going forward. France finally registered their first effort on goal in the 67th minute with Kolo Muani nodding a corner wide.

But the drama was yet to really get started as France were handed a lifeline with a penalty in the 79th minute. Kolo Munai was fouled by Otamendi, who was the wrong side of his man and brought him down.

As with Argentina’s penalty, there was only one man for the job as Mbappe stepped up. Emiliano Martinez – who had not needed to make a save in the game until that point – did get a hand to it, but the penalty had too much power.

In echoes of the quarter-final against the Netherlands, Argentina were pegged back to 2-2 mere seconds later. It was a stunning finish from Mbappe, playing a quick one-two with Kolo Muani before sending a stunning volley home to complete France’s turnaround.

Messi could have won it for Argentina in the seventh of eight added minutes. He hit a swerving effort goalwards, but a leaping Lloris pushed the ball over the crossbar as the game headed into extra-time.

Argentina went the closest to taking the lead during the added period. At the end of the first half, Lautaro Martinez’s strike was sensationally blocked by Dayot Upamecano before Montiel’s effort from range was nodded over. Lautaro Martinez tried his luck again soon after, but he poked the ball wide.

Man of the match: Kylian Mbappe.

Lautaro Martinez was involved again as Messi fired Argentina back in front in the second half of extra-time. The Inter Milan forward forced a sublime save from Lloris, but Messi was lurking for the rebound. He fired goalwards, with Jules Kounde clearing from deep inside the net. There were a few seconds of nerves as the referee consulted his goal-line technology watch before awarding the goal.

But in a game the epitomised the drama of football, France were awarded a second penalty with four minutes of extra-time to play. Mbappe let fly from the edge of the area, but a jumping Montiel blocked it with an outstretched arm. The France forward lined the spot kick up once again, dispatching past Emiliano Martinez, as the game went to a penalty shootout.

The two stars of the show – Mbappe and Messi – scored the first two penalties. But Martinez denied Coman before Tchouameni sent his effort wide. Paulo Dybala and Leandro Parades had scored theirs in between, before Kolo Muani also found the net for France.

Martinez: I was calm during penalties

Argentina goalkeeper Emiliano Martinez says he remained calm during the penalty shootout as he helped his country to World Cup victory.

“It was a game where we suffered,” he said. “Two poor shots and they levelled. They give them another penalty, they scored. Thank God later I did my thing, what I dreamed of.

“There could not have been a World Cup that I have dreamed of like this. I was calm during the penalties.”

For Scaloni, it was a nail-biting finish to a turbulent tournament and he could not hold back his tears following the final whistle.

“I cannot believe that we have suffered so much in a perfect game. Unbelievable, but this team responds to everything,” Scaloni added.

“I am proud of the work they did. It is an exciting group. With the blows we received today, with the draws, this makes you emotional. I want to tell people to enjoy, it’s a historic moment for our country.

“We who live for this and who have been through the good and the bad are used to these things… Above all it is an incredible enjoyment. Being at the top as we are now is something unique.”