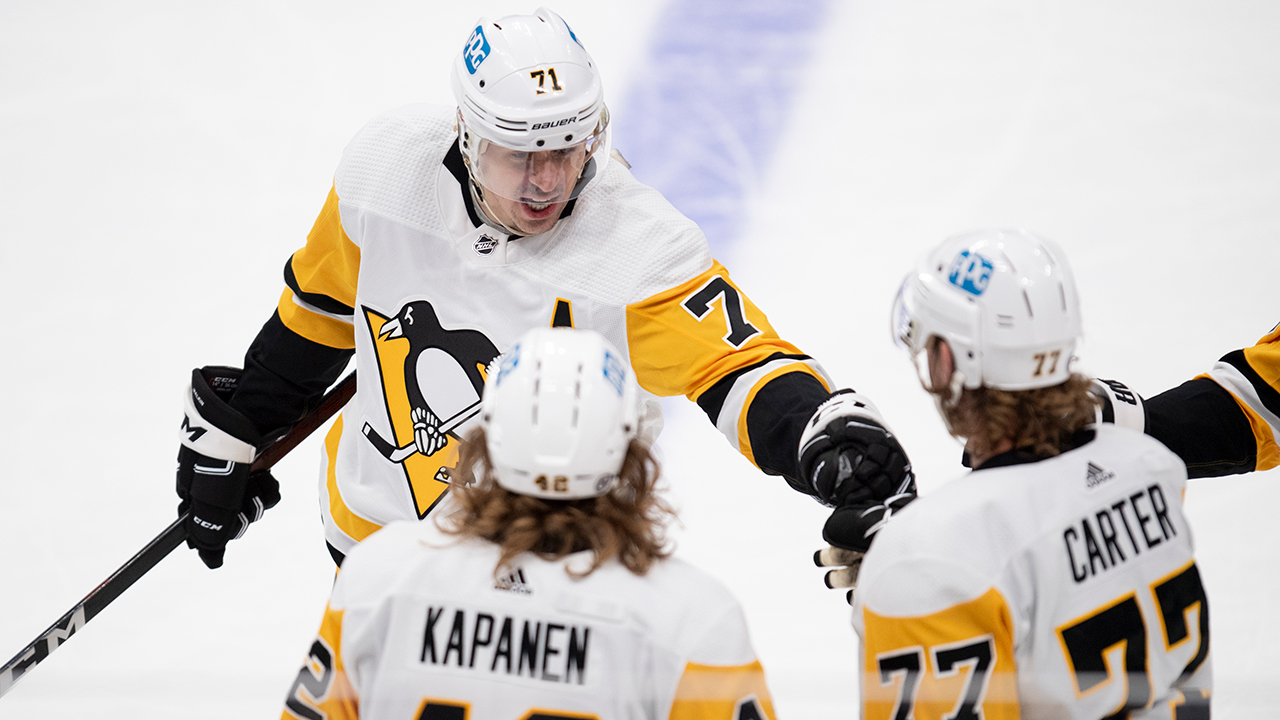 ANAHEIM, Calif. — Evgeni Malkin couldn’t have dreamed up a better return to the Pittsburgh Penguins‘ lineup.

The four-time All-Star and 2012 Hart Trophy winner scored twice and had an assist in his season debut Tuesday night as the surging Penguins rolled to a 4-1 victory over the Anaheim Ducks.

“Obviously we were hopeful that he’d have an immediate impact, and to score two goals like he did tonight, set up an empty-netter on one of (Jeff Carter’s) goals, was quite an impact on the game,” Penguins coach Mike Sullivan said.

Malkin had not played since undergoing right knee surgery in June. He missed Pittsburgh’s first 34 games, but had been skating with teammates for several weeks and was a full participant in Monday’s practice.

The 35-year-old Russian star centered the second line between Carter and Kasperi Kapanen, which was responsible for all four Pittsburgh goals. Carter scored two and Kapanen had two assists.

It was Malkin’s 63rd multigoal game during the regular season and first since March 10, 2020. He had a career-low eight goals and 28 points in 33 games last season.

“It was a long process for me. This was the longest break in my life,” said Malkin, who got 20 shifts and 17:21 of ice time. “We won and I scored a couple of goals — it felt amazing. I feel so at ease right now.”

Tristan Jarry stopped 25 shots for the Penguins, who bounced right back from Saturday’s 3-2 loss at Dallas that snapped a 10-game winning streak.

“I do believe our guys were trying. They were trying to keep level-headed and neutral in their thinking coming out of the first,” Anaheim coach Dallas Eakins said. “I did think we got better as the game went on, but it just took a while for us to get our feet underneath us.”

Malkin got his first goal on a power play at 3:27 of the second period to give Pittsburgh a 2-0 advantage. He ripped a 47-foot slap shot that went through Stolarz’s legs. Sidney Crosby, screening Stolarz on the play, had to leap and just avoided the puck deflecting off his skate.

Malkin added another at 14:38 of the second when he redirected John Marino’s shot off Stolarz’s blocker. He then assisted on Carter’s empty-net goal with 2:57 remaining.

“I’m not trying to celebrate too hard, you know? I’m just having fun,” Malkin said. “We had a couple of good chances, power plays, my partners gave me nice pucks, passes. I tried to do my job, shoot the puck on the power play, play it simple.”

Carter, who had his 65th multigoal game, opened the scoring 65 seconds in when he took advantage of a turnover deep in the Ducks zone and fired a slap shot that went in off the far post. Carter has 11 goals this season and three in his last four games.

Silfverberg scored his second goal of the season and first in 31 games at 8:33 of the second when he knocked in a rebound. Jarry made a pad save on Josh Manson’s shot, but Sonny Milano was able to keep the puck alive and fed it to Silfverberg as Jarry was still down on the ice.

“It’s been a while. I stopped counting there after a while, but obviously it felt good,” Silfverberg said. “We’ve been struggling as a team here as of late to score goals, so hopefully I’ll pick that up and from now on won’t take as long this time.”

Silfverberg scored 21 goals in 2018-19 and has four seasons with at least 20. But the Anaheim right wing has only 10 goals since the start of last season.

Malkin’s second goal was the 74th game-winner of his 16-year NHL career. That tied him with Mario Lemieux for second place in Penguins history behind Jaromir Jagr (78).

Penguins: Remain in Southern California to face the Los Angeles Kings on Thursday.

Ducks: Begin a two-game road trip against the Minnesota Wild on Friday.