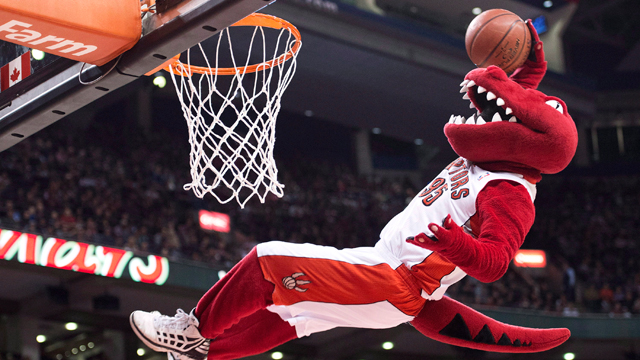 The Toronto Raptors may not be playing in front of any fans at home these days, but that hasn’t stopped the team’s beloved mascot from making its presence felt.

The mascot, named “The Raptor”, has remained a part of the proceedings at Scotiabank Arena while fans aren’t allowed because of COVID-19 restrictions — and the dinosaur had a memorable moment on Tuesday night.

Phoenix Suns star Devin Booker got angry at The Raptor after the mascot attempted to distract him while shooting a free throw with 6.5 seconds left.

The Raptor kicked a foot and waved its arms from behind the net as Booker put up his shot, causing the NBA All-Star to point at the mascot and voice his frustration after the ball went in to give the Suns a 94-92 lead.

The Raptor then was sent to the corner by the referees and Booker made his second free throw — helping the Suns win 99-95.

Afterward, Booker and The Raptors apparently smoothed things over.

Devin Booker on his deal with the Raptors mascot: “We hashed it out. We homies now.”

The Raptor received plenty of support on social media.

Devin Booker on his deal with the Raptors mascot: “We hashed it out. We homies now.”

The Raptor tried to help us with our Toronto parlay, but to no avail
pic.twitter.com/qdSlWQePWr

What would Devin Booker have done if the arena was packed and he was face to face with a bunch of thunder sticks AND The Raptor. https://t.co/4lUPJESJcd

With newfound depth, Oilers enter break on high end of roller-coaster first half